So Proudly We Hailed?

A complex serious of sketches, So Proudly We Hailed points out the places where our American values and the ownership of guns intersect. When you enter the theatre, the massive flag hanging on the wall dominates the space. As a regular attendee of Fringe shows, I don’t expect to see such a display of patriotism. The opening 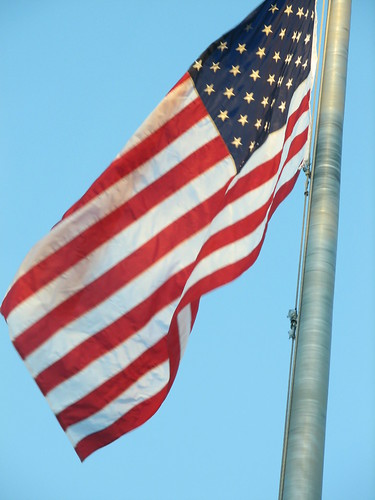 of the show makes one wonder what direction this show will take with the subject matter.

Written and produced as a collaborative effort by NoMad’s Art Collective, the show’s greatest achievement is avoiding providing any answers at all. Each sketch raises more opportunity for reflection. Some moments stand out as positive portrayals, especially the sketches portraying soldiers on the battlefield. Here the valor and need for firearms is highlighted. Another sketch points out the ignorance of some who purchase guns because our regulations make it all too easy to casually buy one.

Some sketches were easier to understand than others. For example, the orientation presentation about how to handle an “active shooter situation” was hilarious, if eerily on point. Others only made their point clear in juxtaposition to another sketch, like one soldier feeling conflicted about firing another human being, while in another sketch a soldier glories in the violence his firearm can produce. The two actors, Drew Beyer and Ki-Jana C. Moore, maintained enough momentum and quality performance to keep the audience engaged, despite some weaknesses in the show’s structure.

I recommend this show for anyone who would like a new way of thinking about gun ownership and regulations. Especially if you have a teenager or a young adult in your life. This show is a great way to start a more nuanced conversation about the complex role of guns in American life. Enjoy.