Take a Note Mick Jagger! Houston Robertson is Satisfied! (on the eve of her 80th Birthday!)

“One of the great things about performing in Fringe Theater Festivals is that you get to meet people you would never get to meet in any other context–other Creatives and creative spirits.” –Houston Robertson,

While waiting for a show to begin Friday night, we were introduced to visiting artist Houston Robertson of San Francisco by fellow visiting artist Les Kurkendaal of West Hollywood. “Oh. That’s Houston. You have got to meet her,” he said taking us by the hand. Completely beguiled by her energy, we immediately rearranged our schedule so that we could catch her Sunday show. 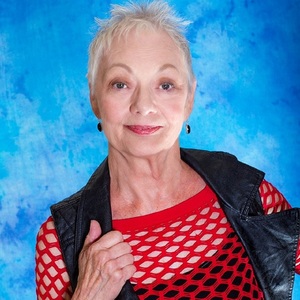 “A naïve, divorced virgin bride of the 1950s grabs you by the heart as she romps through the fearless and funny episodes of her midlife madness. She finally recycles into a sexy independent woman. Or am I a take-charge bitch? She wonders. This wise, wild, witty show is full of surprises.” (IndyFringe directory of shows)

Robertson, a preacher’s daughter born in 1936, spent the first half of her life reading from a script–the script that seemed to be issued to all girls and young women of the ’40s, ’50s, and ’60s: “Be a good girl. Don’t draw attention to yourself. Go to college to get an MRS degree. Live in unsatisfying obscurity for the rest of your life. You don’t have to like it, but don’t complain.” While Houston stayed on script for twenty plus years, the husband to whom she had devoted her life suddenly pulled the rug out from under her and left the marriage, offering neither apologies nor spousal or parental support.

One might think that this would be the ending to a very dreary story, but in Robertson’s case, it was the beginning of a very exciting, sometimes scary, but always hopeful and eventually highly satisfying life.

In the audience was local Jodee Strohmier, who grew up on the east side and now resides in Franklin. Strohmier found the show to be uplifting and inspiring: “She went from a cloistered housewife to a ‘take-charge bitch.’ But why do people find it necessary to call a woman who takes charge of her own a life a bitch? Doesn’t matter, that’s their issue, not mine! If you need to call women like us bitches, so be it!” Strohmier has been attending IndyFringe for the past four years, usually catching five shows per festival. Next to IndyFringe, her favorite Indy event is the Indy 500. Every year she either attends the race or throws a race party. 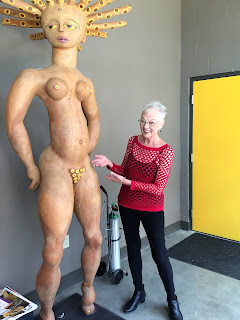 What does “Marianne” have in common with Victory for the Recycled Virgin? Come to the show to find out!
Who is “Marianne?” Stay tuned! That’s another story for another day! 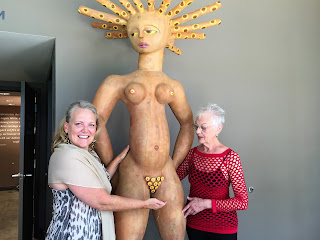 Jodee and Houston are obviously kindred spirits, as they both wanted “Marianne” in their photo op! Great ladies with great minds think alike!

Later we sat down with Robertson to discuss how she came to write the show and become a first-time performer at age 76. Today, on the eve of her 80th birthday, she is in the midst of living the dream she dutifully dismissed in her early twenties, because “Good girls did not go into theater.”

Roberston will never forget her first performance, four years ago. Her then 28 year-old grand daughter traveled a great distance to see her show, and when it concluded, she said in awe, “Grandma, it’s obvious you’re exactly where you should be.” Since then, she has had countless young women approach her after shows, breathless, exclaiming, “I want to be you!” “Well,” she responds, “When you’re 79, you can be!”

A painfully shy child and teenager, Robertson found it difficult to talk to people, but she always felt comfortable with public speaking as long as she was prepared. “My father was a preacher, and I spent my life watching him do it. I thought it was what everyone did.”

Robertson has held many jobs and career paths following her emancipation, including typist, secretary, civic organizer, clown, HR director, and most recently, motivational speaker. Although she was learning and growing at a time when most people begin to opt out of adventure, she still felt like her life was incomplete. She’d been a writer for years, but wanted to put her love of the stage to the test. Three and a half years ago, she decided the time was right to take her writing from the page to the stage.

The San Francisco Bay area has a large performance community devoted to solo artists. Robertson began attending a series called “Tell it on Tuesdays,” which featured four new solo artists every week. She watched the shows intently, learning all she could. Soon she acquainted herself with producers, who put her in touch with a director, and thus began her journey of revising, practicing, and performing. In the past three and a half years, her show has grown and become more polished. “I tweak it constantly,” she says. She has performed it countless times across the U.S. and Canada, but this is her first visit to Indianapolis and IndyFringe.

“Over the past few years of performing in San Francisco and touring around, I kept hearing a buzz about IndyFringe. Everyone said it’s not the biggest Fringe festival, but it’s definitely one of the best.” She couldn’t agree more with that assessment, marveling at the friendliness, hospitality, and enthusiasm of of locals and patrons; and how compact and convenient the venues along Massachusetts Avenue are. “When I’m not performing, I just love walking the streets talking to passersby and local merchants, and everyone here gets behind us.”

When we asked to interview her for our blog, she shared that she loved our mission and was excited to included. “I call myself ‘incurably cheerful.’ Even though I’m not always happy, if I see someone looking happy or think of something funny, I smile, and I am instantly cheered up.” She continued, “Particularly since my seventies and doing theater work, the word I can now use to describe my life is satisfied. I feel satisfied. That is a strong word. Life has issues its share of disappointments, difficulties, struggles. In my fifties and sixties, I began to reconcile those disappointments, come to terms with circumstances, and recover this dream, and I! Feel! So! Satisfied!” Take a note Mick Jagger!

Robertson shared with us her personal motto: Model your life after the oak tree. It’s most productive years begin at age fifty. “This has been my experience. Once I began reconciling those disappointments, I didn’t let other factors impede me from getting I wanted. I was told ‘No’ for the first forty-plus years of my life. And now, I like where I’m at. And it turns out, I like who I am.”

Because this a blog about the positive things happening around Indy, we have to close with this quote from Robertson:

“Performing at IndyFringe gives me credibility as an artist and entertainer.”

And finally, here’s a picture of our pal Les Kurkendaal, whom we have to thank for introducing us to our new BFF Houston Robertson. Be sure to catch Kurkendaal’s new show,  Terror on the High Seas coming up Tuesday at 7;30 at Comedy Sportz. We’ll be featuring Kurkendaal in an upcoming entry, so stay tuned!

TONIGHT at 7:45 you can also catch the talk he performed while on tour with The Moth Storytelling Hour at the Short Fringe Theater next to the beer tent!

Les Kurkendaal is not only an IndyFringe favorite in his own right, but he tirelessly promotes other artists as well! With a smile like that, how can you help but love him at first sight?!